Some Fava Beans and a Nice Chianti

Chris’ hours seem to be getting longer and longer. Such is the life of a first year associate at a big law firm, I suppose. But it means I’ve been spending quite a few evenings alone lately. Okay, with Miss Gertie, but still, lots of TV dinners. And by that I don’t mean microwave food, just me eating on the couch in front of the TV. As the weather gets nicer and the days longer, I’m sure I will shed my couch-potato tendencies and do something more productive, or at the very least more interesting, out and about in London. But for now I am completely caught up on my regularly scheduled programs.

When this happens, I breakdown and end up watching shows that I would normally skip and/or judge myself for watching. In an act of desperation/boredom I have recently watched the entire series of HBO’s Enlightened in two nights, bought into the media hype of the very trashy Preachers’ Daughters, and lastly creeped myself out a bit by trying out Hannibal. Frankly I don’t quite get it. What is it really trying to be? Is it going to be solely about cannibals? Are their really a lot of them out there? Ew. Ew. Ew.

I’m confessing this today because I was reading (on eater.com) that in this new show, the creators want to develop Hannibal Lecter’s deep character by showing him as a true chef of human cuisine. And they have actually staffed one of my favorite chefs, José Andrés, as a consultant to make the experience of dining on human organs more palpable to the viewer. Interesting? Yes. Gross? Also yes.

On that note, I thought I would share with you a perfectly normal, downright tasty, and not weird at all recipe. This is a happy light fresh spring risotto that can even easily be made vegetarian if I have left you squeamish.

I started the risotto by toasting the rice and shallot, as usual, but instead of using white wine, I substituted lemon juice for the base. Be sure to zest (and reserve) the lemon before cutting it.

After incorporating 3 cups of chicken broth (or vegetable broth for an entirely meat-free dish), I added the thinly sliced asparagus and fresh spring peas. Then continue to add broth so that the vegetables cook through as the risotto finishes. 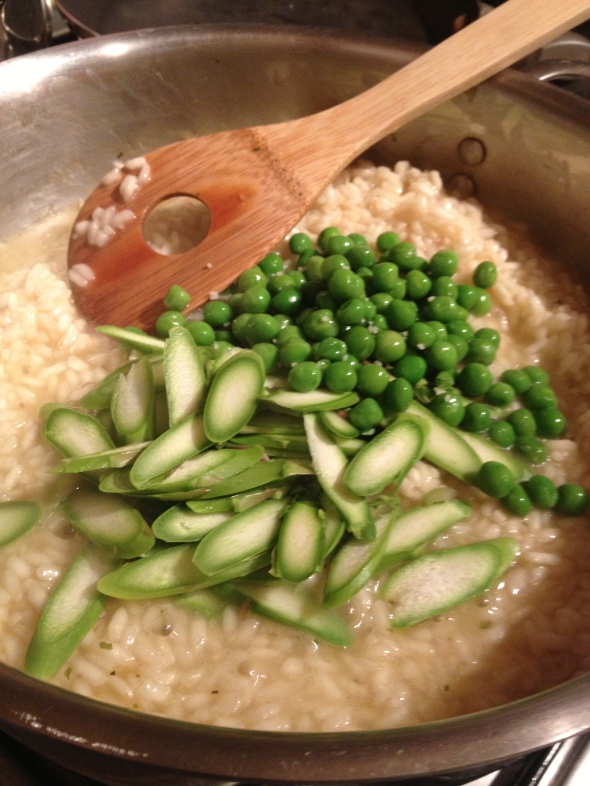 When the risotto is one scoop of broth away from being finished, stir in and wilt the baby spinach.

Just before serving, add lemon zest for an extra zip of flavor and a scoop of mascarpone for a luxurious and silky finish. 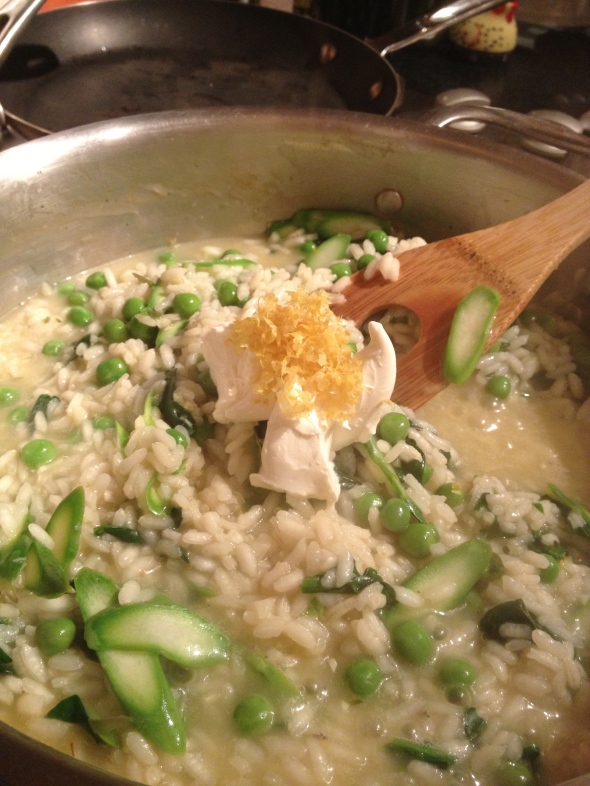 I served this risotto with a grilled leek pork sausage. It would also be great topped with some crisp prosciutto. Or if you are skeeved out by this whole hannibal-cannibal thing, just skip the meat. It’s a hearty fresh dish on its own.

Heat ½ Tbs. olive oil in a large, high-sided skillet over medium heat. Add the shallots, sauté for 3 minutes, then add the Arborio and toast for 2 more minutes. Pour in the lemon juice and stir until just dissolved. Begin adding the broth in the same manner, about 1/3 cup at a time. Stir rice continually as the liquid is absorbed. When the rice soaks up most of the liquid and only a bubbly starch remains, add more broth. Continue 1/3 cup at a time until all but 1 cup of the broth has been added. Then add the sliced asparagus and peas. Continue to add 2 more scoops of broth, then add the spinach. Stir in the remaining broth, mascarpone and lemon zest just before serving. Season with salt and pepper and serve.