We spent last weekend in Prague with our friends from North Carolina. They were headed to Eastern Europe for a week-long vacation and invited us to join them for their first weekend. I’m so happy they did! Here we are after our three course, family-style Sunday roast at Mylnec. Given the unlimited wine that comes with the meal, we were in quite the “food” coma!!!

Prague is a surprisingly big city with so much culture. But it’s still walkable and has the feel of a small Old World town. We were able to get lost (in that good way) wandering the side streets, sipping hot wine, stumbling upon gorgeous architecture, and taking in the sweeping city views from the bridges and atop the Cathedral. I absolutely loved the continuity of the architecture with the varying facades. Truly beautiful buildings. Granted it was a bit of a foggy adventure, but wow the city was gorgeous. 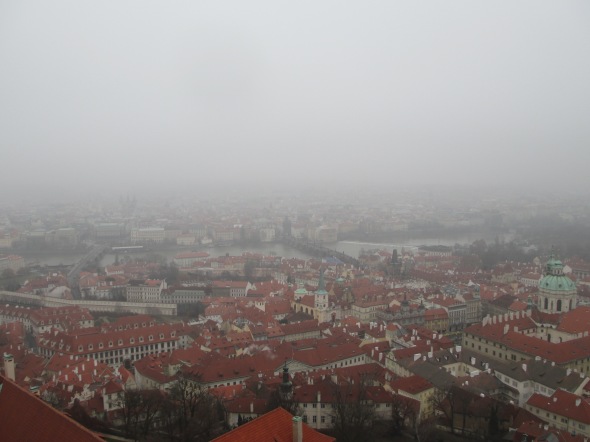 On the plane to Prague, Chris was reading a wikipedia summary of the city. Clearly I’d done some research via tripadvisor on sights and, more importantly, restaurants. But we were leaving a lot of the planning up to our friends who we were meeting. Chris just wanted to brush up on the history, etc., but as we were reading, we realized we had no idea what the traditional food of Prague is??

But don’t you worry your pretty little head. We found out. Again and again. Our first meal was at a local watering hole where we soon discovered they still allow smoking in restaurants!? Weirdsies. Toasting our first meal with Pilsner Urquells, Brigitte and I stuck to #11, which I’m pretty sure claimed to be pork necks and turned out to be incredibly flavorful ham with sauerkraut. Both of our husbands ordered what would prove to be the larger three-meat traditional Czech plate, known to us as #10.

One of the food items by which I was intrigued, but ultimately underwhelmed, were bread dumplings, which basically seemed to be a sort of steamed sliced bread roll. That said, Chris and I really enjoyed this goulash that we had at U Kroka. Maybe these bread dumplings weren’t amazing on their own, but to soak up all the extra gravy they were perfection.

SO… it got me thinking. Back to my sister-in-law’s love of bread and sauce, I don’t hate the idea of this. Why don’t we ever serve stew-like items with bread pudding? Right?? Well as of last night, now I do.

As with any beef stew, give yourself enough time to slowly simmer the beef so it absorbs all the juices and becomes super tender. Start by browning the beef and then giving it lots of flavor, via onions, garlic, red peppers, caraway, and the star of the dish PAPRIKA!! 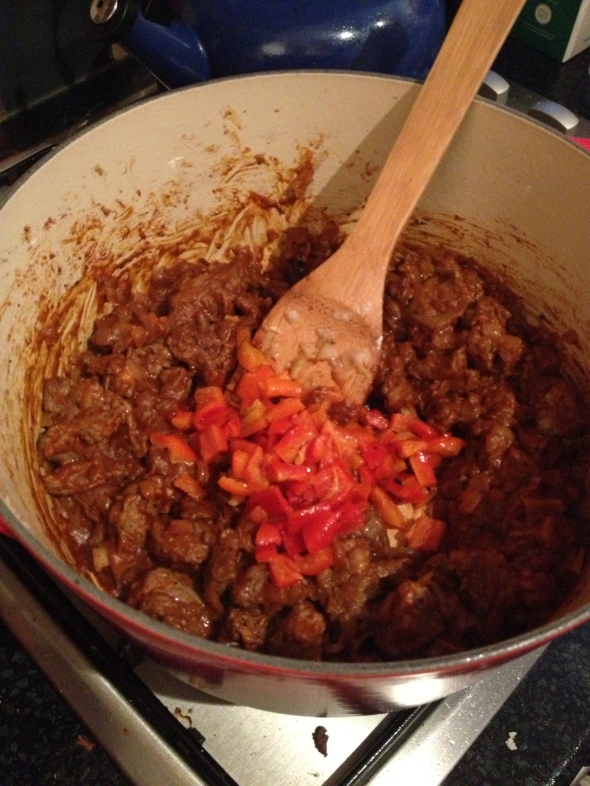 Next add a hearty dose of beef broth and simmer.

For the bread pudding, which you can assemble and bake while your goulash simmers, be sure to use day old (aka dried out) bread. Whisk the eggs and milk with some tomatoes to make a flavorful custard. Then mix it all together. It’s that easy! 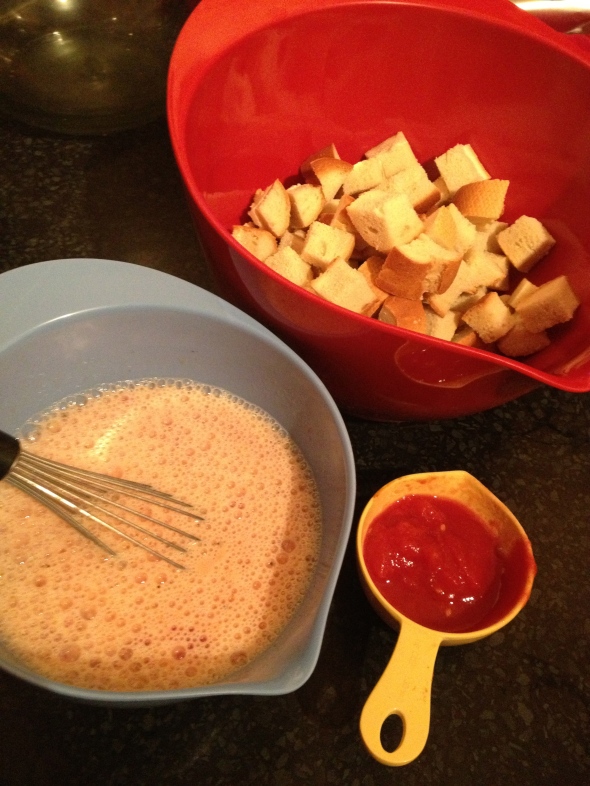 I kept the bread pudding very simple, as I wanted it to be a vehicle for the flavors of the goulash. If you wanted to make it on it’s own, I would probably add some fresh basil or oregano and ramp up the cheese.

To serve, pour the stew into shallow bowls, creating a well for the bread pudding. Then top with the yummy, buttery, crunchy bread pudding. 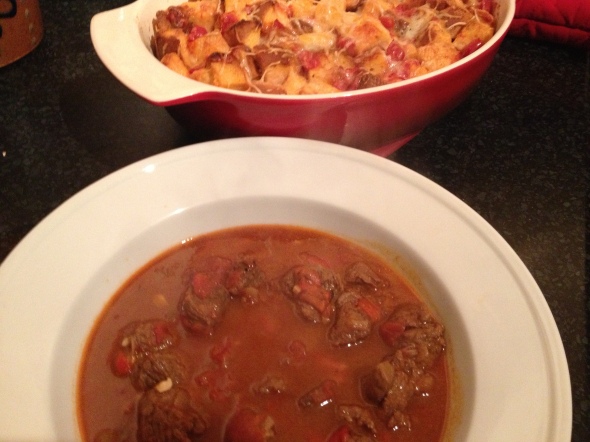 The bread pudding adds a bit of crunch while soaking up the delicious broth and, as a bonus, adds a bit of the creamy flavor that a sour cream usually would.

In a large dutch oven, season the beef with salt and pepper and brown in olive oil over medium heat. After 5 minutes, add the onions and continue to cook for 5 more minutes. Add the garlic, peppers, paprika, caraway, and flour. Once mixed, stir in the tomato paste, red wine vinegar, and tomatoes. Continue to cook for 3 minutes.

Add the beef broth and stir any remaining bits off the bottom and sides of the pot. Bring to a very low simmer and cook covered for 1 ½ hours, stirring occasionally. Remove lid and continue to simmer for 20 minutes.

Whisk together the eggs, milk, and tomatoes. Toss with the bread cubes and season with salt and pepper. Let sit for 10 minutes, then pour into the prepared casserole dish. Sprinkle with cheese.

Cover with tin foil and bake for 30 minutes. Uncover and continue to bake for 20 minutes. Let rest for 5 minutes before serving.