One of the things that drove me nuts about The Voice (besides the fact that I generally don’t like singing competitions shows, and didn’t we have enough talent searches already?) is that it had a decent premise of blind competition. But after the auditions, the big reveal is over. So really, can they actually say it’s only about “the voice”? I think not.

So I’m excited about The Taste because (they claim, we’ll see how it pans out…) the entire judgement will remain blind. There is a mix of cooking expertise: home cooks, caterers, food bloggers, professional chefs. And they all have an equal chance of getting kicked off. In the audition phase, each potential contestant presented just one bite to each of the judges, who then sight unseen determine whether to select the unknown person for their team or to send them packing. But unlike other shows that have taken on this surprise reveal tactic, the elimination process will continue with the anonymity of the chefs during judgement. The judges/mentors, whose panel includes the British great, Nigella Lawson, and everyone’s favorite chef-hole, Anthony Bourdain, can risk spurning their own team members.

As my excitement for the show heightens, I have decided to bring you The Taste Tuesdays. Often times, when I have trouble falling asleep, rather than counting sheep, I dream up my solution to a cooking show’s challenge. Once I was watching a diner cooking challenge on The Worst Cook in America and came up with an entire food truck restaurant concept, but more on that another day…

But I am embracing my cooking show addiction with a weekly tasty bite on Tuesdays. And thanks to these adorable dishes I found at a shop dedicated to ceramics in Paris, I can present my tastes in style. To kick things off, I’m going with my most classic flavors. I’ve always thought that if I were involved in a cooking competition, I would have to give a nod to my favorite annual cooking event, Thanksgiving, so I have rolled it up into just one perfect taste.

I start by making my classic stuffing, which starts by crisping bacon. Obviously. And this pan is going to be the base for the entire yummy bite.

The curveball here is that you don’t actually use the bacon itself for the stuffing. Don’t worry, we will reserve it to toss with Brussels sprouts later. It’s the pan drippings that we are looking for at this point. Drain off some and then sauté the onions and celery. I prep all the ingredients to be very small because we are trying to tightly roll the chicken. 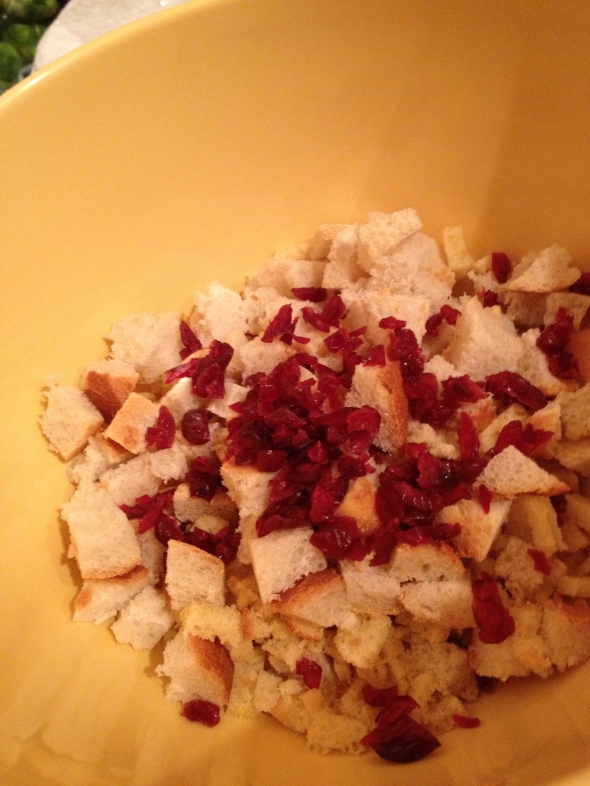 Mix together the french and corn breads, chopped dried cranberries, onion mixture in its yummy drippings, and about 1/4 cup of chicken broth. You want to add enough liquid for the mixture to be moist throughout so that it sticks together but is not excessively wet.

Spread the stuffing evenly onto a very thin chicken breast. Then roll the chicken and secure with toothpicks.

Brown the chicken on each side in the same pan that you sautéed the bacon and onions in. Then place the entire pan in the oven to finish cooking the chicken, about 15 minutes.

Once done, remove the chicken and place back on the stove to make a pan gravy with all the remaining bacon bits. See, I told you not to worry about the bacon. We are going to get all the goodness out of this one. Just add butter and flour and toast for a minute. Then deglaze with the wine and continue whisking as you thicken up the chicken broth. 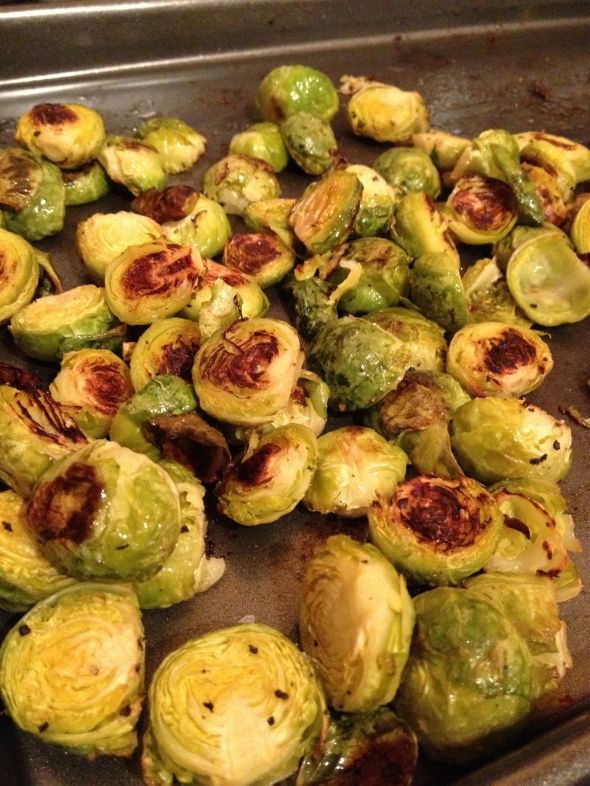 Meanwhile, once you have your chicken started, you will want to get your Brussels sprouts going. Trim and halve 2 pounds of Brussels. Then toss with a mixture of olive oil (or, and I realize I’m being a bit nuts here, the extra bacon grease), dijon, and honey. Then roast for 15-20 minutes until perfectly caramelized and tender.

To make my taste, I serve a slice of the chicken with a Brussels sprout, a bit of bacon and a drizzle of the gravy. But you could of course serve this as a full dinner.

In a large skillet, crisp the diced bacon. Remove and drain on a paper towel. Pour off the bacon grease. Reserve.

Add the onions and celery and sauté for 5 minutes, until soft. Season with sage, salt, and pepper.

Mix together the bread cubes, crumbs, cranberries, onion mixture, and chicken broth. Add enough liquid for the mixture to be moist throughout so that it sticks together but is not excessively wet.

Spread the mixture evenly over four thin chicken breasts. Roll the long side of the chicken onto itself and secure with toothpicks. Reheating the skillet over medium high heat, sear the chicken on each side then place into the oven to finish cooking through, about 15 minutes.

Meanwhile, toss the Brussels sprouts with a mixture of 1 Tbs. bacon grease, Dijon, and honey. Spread onto a baking sheet and bake for 15-20 minutes, until caramelized on the outside and tender through. Toss with the reserved bacon.

Once the chicken is finished, remove from the skillet and keep warm. Place skillet back onto the stove and melt the butter. Whisk in the flour. Toast for one minute. Deglaze with the wine and continue whisking as you add the chicken broth. Simmer for 5 minutes until thickened.

Thinly slice the chicken roulades. Serve over a bed of Brussels sprouts and drizzle with gravy.

Meatball Sub Soup!?! »
« Shrimp and Grits Some Other Day