My husband has been working long hours this week. I’m hoping it’s just one last rush before the holidays, since it’s pretty quite around here without him. On Wednesday night, Chris worked late into the evening, so I wrote Christmas cards and had cheese for dinner. 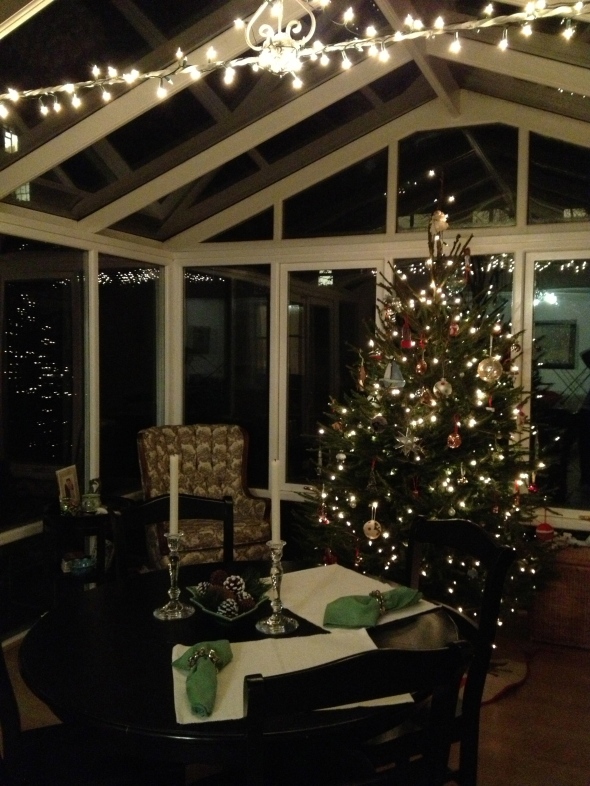 While I love a cozy night in my winter wonderland, two nights in a row of makeshift meals seemed wrong. Last night, Chris assumed he would be working late again, so I made plans with my sister-in-law to have dinner here and watch Magic Mike. Chris’ oldest sister, (of five!?!) lives here in London too, so I thought it was a great chance for a girls’ night in.

Of course, of all nights, Chris walked in the door at 6:30, an hour earlier than his usual early nights. No worries, the show must go on. The male strip show, that is. My husband has been known to hold his own with chick flicks and my trashy reality shows (you’ll hear all about our battling opinions come January and the start of the new Bachelor season), but was this asking too much? I think the teacup pig, Herman, really kept him involved. And maybe Olivia Munn being topless in the first 5 minutes didn’t hurt anything.

For dinner, I made my favorite winter pasta dish: Cauliflower and Salami Pasta. When I came up with this dish, I was uber-skeptical about cauliflower in pasta. Don’t get me wrong I love both cauliflower and pasta, but there just seemed something bulky about putting them together. Maybe they seemed too starchy, or white on white, or there just wouldn’t be enough contrast in texture and flavor. I don’t know what it was. Just something about it. I would read all these recipes and just not be sold.

I figured what better way to figure out if it was a worthy combination or not, then by trying it my own way. That way if it’s gross, I have no one to blame but myself or the Gods of weird food pairings. I start by roasting the cauliflower, which is my favorite preparation, then add salami and goat cheese. I use mustard and loads of white wine in the sauce. But topping the dish with crunchy breadcrumbs really adds the missing texture element and finishes the dish perfectly. 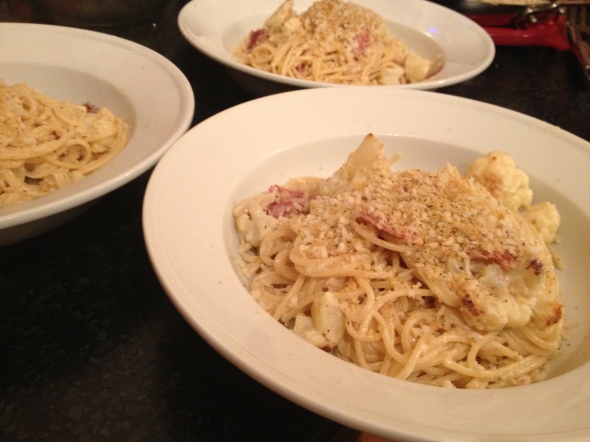 In the end, in my opinion, this dish rocks. I have made it a few times now and I guess you could say I’m a convert to cauliflower in pasta. I don’t know for sure though. I still haven’t tried it any other way. 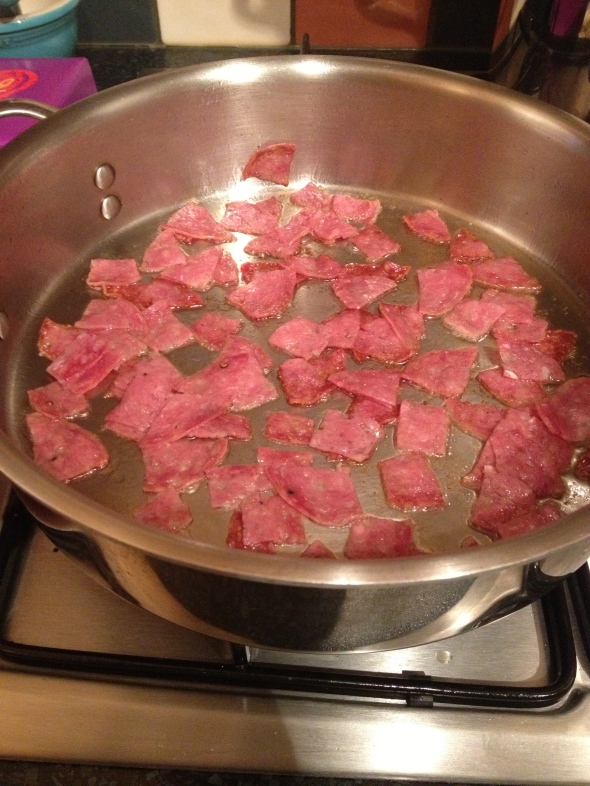 Make sure to get a good crisp on the salami so that it adds a layer of salty crunch to the pasta. 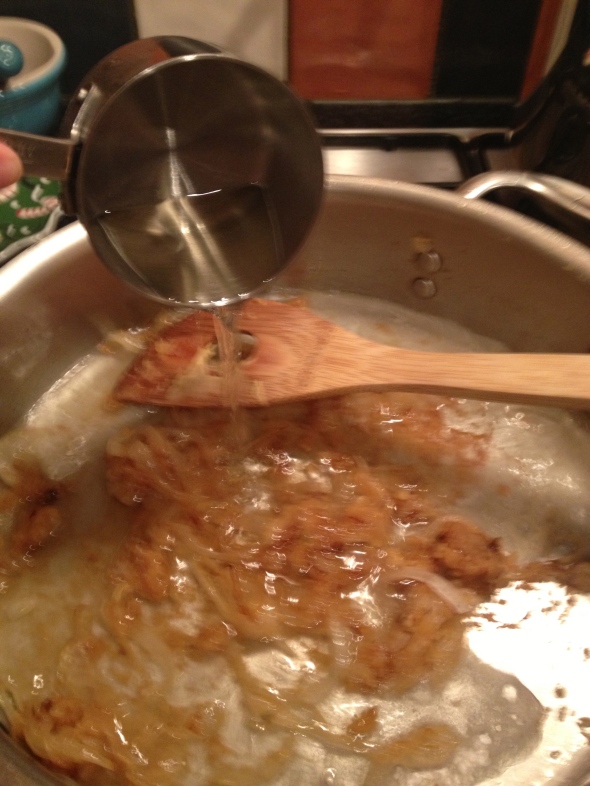 The onions, butter, mustard, and wine, cooked with a bit of chicken soup base, creates a saucy savory base. (If you don’t have a chicken soup or stock starter, I would substitute 1 cup of chicken broth instead of the pasta water.) And then the goat cheese makes the pasta pop with smooth tangy goodness. 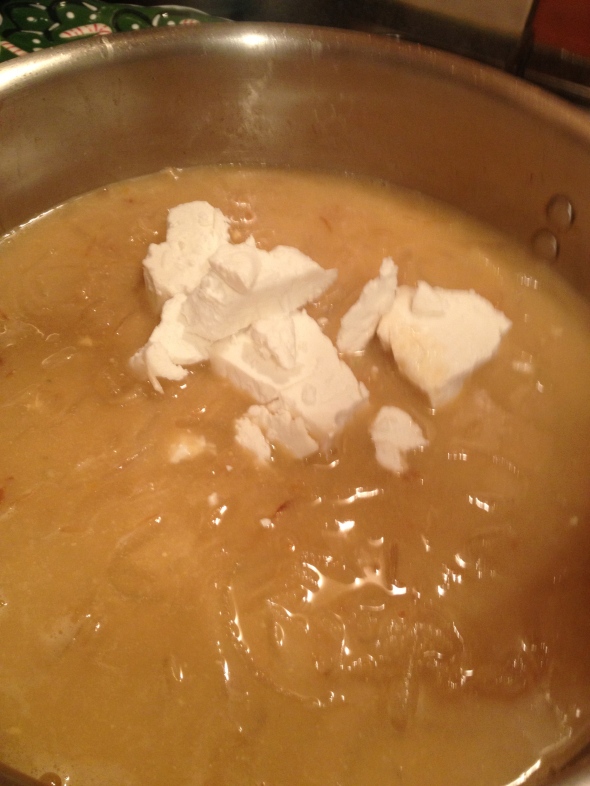 Good news- if you or any of the people you love to feed are lactose intolerant, since this dish uses goats cheese for the creamy element, if you hold back on the parmesan, it’s a great allergy-friendly velvety pasta. 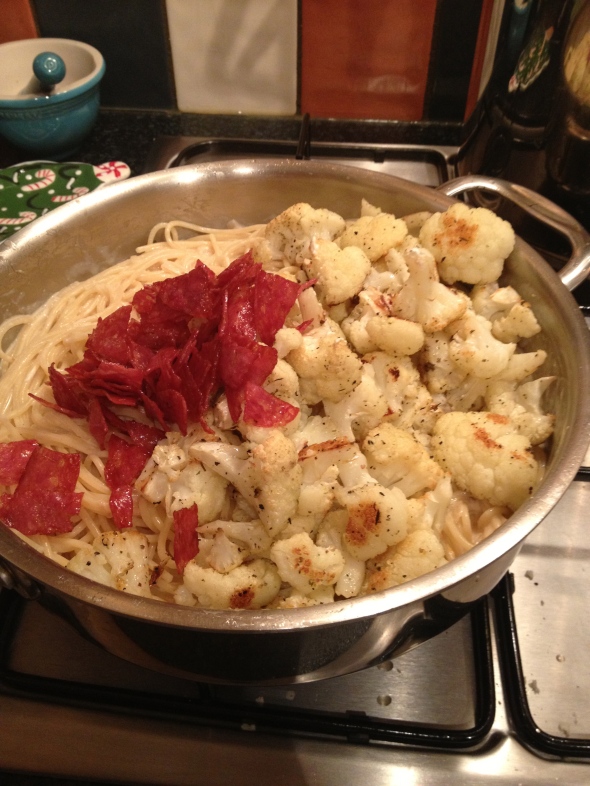 Toss the pasta in the sauce with the cauliflower, salami, and parmesan. Then top with the crunchy breadcrumbs and enjoy! 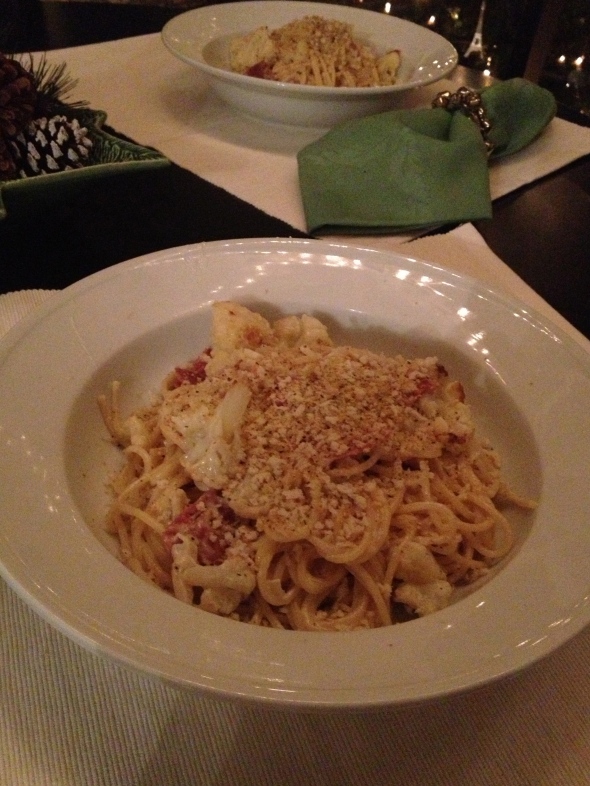 1 tsp Mural of Flavor (Penzeys) or other lemony herb spice

Preheat oven to 400 and put a pot of water on to boil.

Toss cauliflower with salt, olive oil and Mural of Flavor. Spread out on baking sheet and roast for 15 minutes.

Add pasta to boiling, salted water and cook until al dente, about 9 minutes.

Meanwhile, sauté salami in a large high-sided pan in a drizzle of olive oil until crisp.  Remove from pan and add onions.  Cook until soft and then add butter and soup starter.  Once butter and starter melt, add flour and sauté about 2 minutes, then add wine to deglaze pan. Stir in mustard and 1 cup of pasta water.

Remove from heat and melt in goat cheese and Parmesan.

Once pasta and cauliflower are ready, return to heat and add pasta, salami and cauliflower.  Stir in about another ½ cup pasta water, as needed to thin and spread the sauce.

Serve with breadcrumbs and more Parmesan.