I realized that I have yet to tell you about the trip that Chris and I took to Luxembourg about a month back. It was an interesting weekend to say the least. I will say the city itself is very pretty, but almost too pristine and kind of Disney-ish. It’s obviously small and we covered most of it by the first night. After walking around the town, we had an incredible meal at L’Annexe, sitting outside watching the sunset late in the evening. But really we were there so that Chris could participate in the ING half-marathon. Here’s the rest of the story…

Since, this half-marathon thing was Chris’ bag, I didn’t do my usual extensive planning. I got our plane tickets, booked the hotel, noted a couple restaurants and sights to see, but I don’t really do race things, so I was leaving all those logistics up to Chris. Big Mistake. What he neglected to realize until we were at the airport was that it was a “night marathon” so basically we thought he would run early Saturday and then we’d have the day to explore, but instead he would start running at 7pm. Translation: straight through dinner time. Interesting.

So we went about our day, exploring Luxembourg and then made our way up to his law firm’s Luxembourg office where we were supposed to get his race gear and shuttle to the race. All of this was completely north of town, by the way, and the buses that we took to get up there would stop running back into town once the race started. So already I was concerned that we had no clue how we were going to get home. Long story short, we couldn’t find the office and wandered for 45 minutes. Chris phone died within a matter of minutes, so we couldn’t even call them or search google maps. Finally we found the office about 20 minutes before the race was starting. We rushed to the shuttle but then Chris got off at the wrong shuttle stop and missed the race.

Luckily during all that time wandering around, I had pointed out where I was going to be watching the race (and drinking wine) so Chris was able to find me. But then we go back to the office to get his stuff, and assumed the Luxembourg associates at the firm would be able to tell us how to get back to the city center. No luck. They not only don’t have a clue, but apparently don’t have access to internet/printers to give us a map, which of course we had left ours in the hotel. So we had to walk, following the race path, back into town and then find our way to the hotel. We were hoping to find a place to grab dinner on the way, but everything was so crowded with people watching the race and partying. Anyways, we finally we got back to the hotel area and end up getting fast food burgers and a bottle of wine from the hotel lobby and have dinner in our room. At least I think we walked about 13 miles in total.

If there was an upside, I suppose, it was that Chris’ body wasn’t too broken down from the race for us to hike around more on Sunday morning before our flight home. We explored the Bock Casemate which is a fortress built into the cliff of the city. You can climb down into deep underground cellars that were once used for gun powder storage, booby trapped to self-destruct under siege. It was very cool.

I also discovered an amazing summer drink while there: Panache, which is basically beer mixed with Sprite (or “lemonade” which for my US readers is actually clear lemon soda in Europe, not the fresh squeezed stuff we get at the fair or the Country Time powder mix that send me straight back to my childhood trips to the beach). This is the perfect refreshment to enjoy in the hot sun. Also, probably too much information, but it is a great “hair of the dog” drink if you are suffering from over doing it on Saturday night.

We spent this Sunday at London Field, along with pretty much everyone else in East London, and Panaches were the best accompaniment to a people watching and picnic filled Sunday Fun-day. 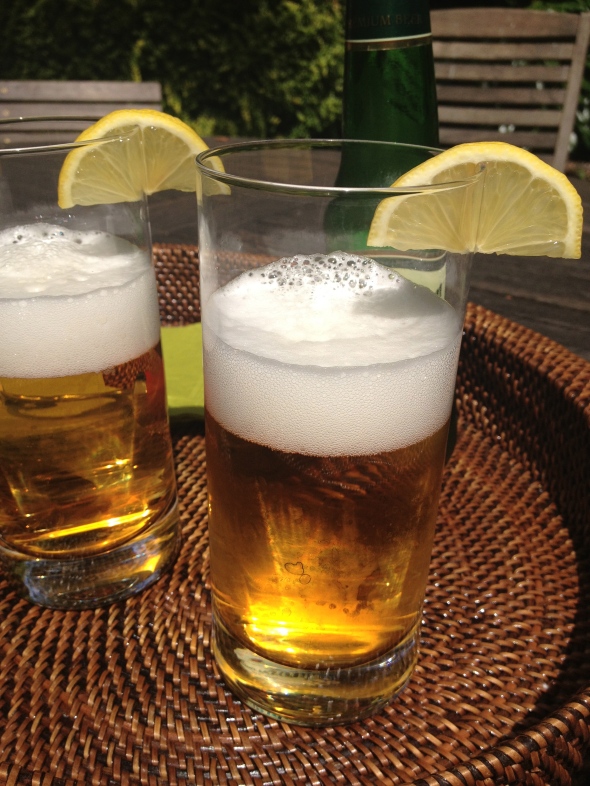